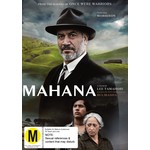 1960s, East Coast of New Zealand. Two Maori sheep-shearing families, the Mahanas and the Poatas, are longstanding enemies and commercial rivals. 14-year-old Simeon Mahana, the youngest son is in conflict with his traditionalist grandfather, Tamihana. As Simeon unravels the truth behind the longstanding family vendetta he risks not just his own future prospects but the cohesion of the entire tight-knit society.

Inspired by Witi Ihimaera's novel Bulibasha, and directed by Lee Tamahori, Mahana is a profound and enduring tale of rural family life.

It's very rare for people to return, let alone to a film with a much lower budget than anything he's done, since Warriors. We have Witi to thank for this. His book, Bulibasha, really appealed to Lee because it's about the people he knows and loves and wants to see portrayed on film.
- Producer Robin Scholes on director Lee Tamahori