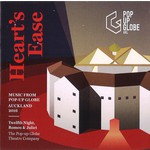 The haunting and beautiful soundtrack to the Pop-up Globe Theatre Company's unforgettable productions of Twelfth Night and Romeo & Juliet.

Award-winning New Zealand composer Paul McLaney was commissioned to compose original music for both productions including settings of 'Heart's Ease' 'O Mistress Mine' 'The Wind and the Rain' and 'Come Away Death' as well as the compositions that underscored key scenes in the play; from Capulet's "old accustomed feast" to the stealthy box trees of Olivia's garden. The album features the full cast of both shows.

"The Pop-up Globe itself is more than I could have ever hoped for. I LOVE it. I think I love it more than the London Globe. Many audience members will go away entirely happy with what they've seen. As a Shakespearean nerd, I am so thrilled about how Aucklanders have taken to the concept. We are seeing and talking about Shakespeare, there is such a buzz in the venue. We are excited." James Wenley Theatre Scenes