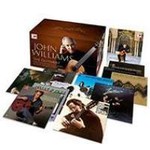 Sony Classical has issued the first-ever complete collection of recordings by the incomparable John Williams. This Original Jacket Collection comprises 57 original albums made over four decades, including his style-crossing collaborations and a DVD. And Williams's recordings of more than 60 works will now be available on CD for the first time, all mastered from the original tapes.

Born in Melbourne but living in London from an early age, John Williams studied at the Royal College of Music and in Siena with Andrés Segovia, who called him a "prince of the guitar". In the years following his acclaimed Wigmore Hall debut in 1958, he gave enormously successful concerts in Paris, Madrid and the Soviet Union, and in 1963 he made his debuts in Japan and the USA. Described by guitar authority Graham Wade as "perhaps the most technically accomplished guitarist the world has seen", Williams was one of the first classical musicians to play at London's iconic Ronnie Scott's Jazz Club and he has also appeared in rock concerts playing steel-strung acoustic and electric instruments, and with his own groups Sky, Attacca, and "John Williams and Friends". His recording of the "Cavatina" from The Deer Hunter hit the pop charts (of course it's included in this collection). The long and distinguished list of his musical collaborators includes fellow guitar legend Julian Bream as well as Paco Peña, Itzhak Perlman and André Previn.

Composers including Leo Brouwer, Stephen Dodgson and André Previn have written for him. Williams made his first album - Bach and Spanish repertoire - for Columbia Masterworks in 1964, and seven years later received a special award from CBS Records to celebrate having sold one million records, a unique feat at the time for a classical musician. Among his most recent Sony Classical releases are "The Magic Box", a compilation of classical, folk, world and country music from 2002, and "Places Between: John Williams and John Etheridge Live in Dublin". The complete collection naturally contains these and everything else Williams recorded in between, by composers ranging from Byrd, Dowland, Couperin, Scarlatti and Handel to Paganini, Elgar, Fauré, Falla, Albeniz, Britten, Villa-Lobos, Takemitsu, Theodorakis, Brouwer as well as film music by Nino Rota, Henry Mancini and Ennio Morricone.

There's also his intoxicating disc of Venezuelan guitar music, showcasing "exceptional solo playing that is both rhythmically charged and lyrically impulsive … It would be difficult to imagine a finer tribute to a remarkable and appealing musical tradition than this one … In a word: brilliant" (ClassicsToday).

The new box contains no fewer than three different Williams recordings of that most popular of all guitar works, Rodrigo's Concierto de Aranjuez - from 1964 with the Ormandy and the Philadelphia Orchestra, from 1974 with Barenboim and the English Chamber Orchestra, and from 1983 with Frémaux and the Philharmonia Orchestra - plus a performance of its much-loved Adagio in Williams's celebrated 1993 "Seville Concert". That entire concert is presented here too, on both CD and DVD - the latter also including a bonus documentary portrait of the artist. Reviewing his second studio recording of the concerto, Gramophone in January 1975 proclaimed: "John Williams himself has already made one of the finest [versions], yet if possible even more conclusively this new one must be counted a winner, irresistible from first to last. Williams before showed himself the most formidable technician, rigorously precise: now he shows himself as that and more, giving Rodrigo's ideas extra flair and imagination."

A host of other irresistible Williams recordings came about when he teamed up with Julian Bream in the 1970s to play guitar duets. The album's huge success led to two sequels. RCA later repackaged the three LPs onto two CDs, adding tracks from the artists' "Together - Live" recording. BBC Music Magazine wrote: "Bream and Williams make a dream duo, and the three Together LPs from the seventies are arguably the finest ever made of music for two guitars … Be warned: buy one, and you'll want the other." That won't be a problem for buyers of this box set: both CDs containing all the "Together" tracks are included in this vast CD/DVD collection.

Note: The two collaborations with Cleo Laine are no longer owned by Sony and therefore not included in this set.