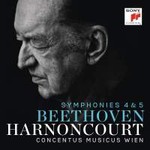 Nikolaus Harnoncourt is celebrated as one of the most influential musical personalities of the second-half of the twentieth century, and this new release is the last recording made by the great conductor, having announcing his retirement in December 2015. It is also the first time Harnoncourt conducts Beethoven's symphonies 4 and 5 with Concentus Musicus Vienna, which he founded in 1953 and now is the longest existing period instrument ensemble.

A pioneer of the early music movement, he founded the period-instrument ensemble Concentus Musicus Wien in 1953 with his wife, Alice Hoffelner. After 60 years of conducting this ensemble, and a life-long study of the last three Mozart Symphonies, he now felt the time is right to make his last statement and record these works. Harnoncourt always wanted to record these works on historical instruments. For him it is the only way to demonstrate Beethoven's radicalism in sound. After sixty years of playing and conducting Beethoven's music, this release is Harnoncourt's definitive view on Beethoven's symphonies.

In the booklet note Harnoncourt declares, that Beethoven's Symphony No.5 has been completely misunderstood. It has nothing to do with destiny, but tells the story of "the revolt of the masses". He understands this symphony as Beethoven's greatest political statement.

The album is a live-recording from two sold-out concerts at the Musikverein Vienna, considered one of the finest concert halls in the world, due to its highly regarded acoustics.

"The speeds are not different to the earlier set, but the transparency and detailing of the instruments has a cinematic quality. From the sublimely mysterious opening of the Fourth, to the electric coda of the last movement of the Fifth with added pauses, this recording burns with intensity and vitality." - ***** The Guardian

"The new account of the Fourth Symphony nicely complements the older Chamber Orchestra of Europe version...What is different is a more purposeful tread to the rhythms and some fresh voicings of wind and brass...I'm rather relieved to hear Harnoncourt going out with a bang rather than a whimper. He is too courageous a musician to have done anything less." - Gramophone March 2016

"This is Beethoven raw at the edges, the Symphony No. 4 bristling with a truculent, elbow-in-the-ribs kind of humour and a Symphony No. 5 with a taste for melodrama, honking horns, hammer-blow accents and sudden gasps for breath." Financial Times