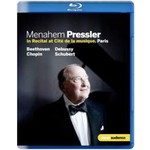 For more than 50 years, Menahem Pressler was the driving force of the legendary Beaux Arts Trio, giving 6.000 performances until the trio stopped concertizing in 2009. Menahem Pressler is now returning to a solo career.

During this recital filmed at Paris' Cité de la Musique 2011, Menahem Pressler plays two of the most imposing works in the piano repertoire: Beethoven's penultimate sonata and Schubert's last sonata which both require unusual emotional involvement from the performer.

Menahem Pressler is the last representative of a pianistic tradition directly connected with the great German and French piano schools: he studied with several pupils of the illustrious Ferruccio Busoni but also received valuable advice from Robert Casadesus or Paul Loyonnet who opened the world of Ravel and Debussy to him.

"Pressler's ability to give all the voices prominence while simultaneously isolating the melody was amazing. His fingers still retain a youthful facility." The Washington Post

"His technique may be somewhat dimmed, but the twinkle of his distinctive sound remains as fresh and beautiful as ever; so, too, his astute pointing of musical structure, and the sheer love with which he communicates these great works...Pierre-Martin Juban's straightforward, well-judged direction provides a fine match between style and subject." (Gramophone)