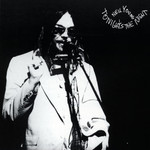 'Tonight's the Night' is the sixth studio album by Canadian musician Neil Young, originally released in 1975. It was recorded in 1973 (most of it on a single day, August 26, its release delayed for two years).
The album peaked at #25 on the Billboard 200, and in 2003, was ranked number 331 on Rolling Stone magazine's list of the 500 greatest albums of all time.