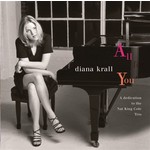 Diana Krall
All For You (2LP)

Pianist/vocalist Diana Krall pays tribute to the Nat King Cole Trio on her Impulse! set. In general, the medium and up-tempo tunes work best, particularly such hot ditties as "I'm an Errand Girl for Rhythm," "Frim Fram Sauce," and "Hit That Jive Jack." Krall does not attempt to directly copy Cole much (either pianistically or vocally), although his influence is obviously felt on some of the songs. The slow ballads are actually as reminiscent of Shirley Horn as Cole, particularly the somber "I'm Through With Love" and "If I Had You." Guitarist Russell Malone gets some solo space on many of the songs and joins in on the group vocal of "Hit That Jive Jack," although it is surprising that he had no other opportunities to interact vocally with Krall; a duet could have been delightful. Bassist Paul Keller is fine in support, pianist Benny Green backs Krall's vocal on "If I Had You," and percussionist Steve Kroon is added on one song. Overall, this is a tasteful effort that succeeds.

Side Two:
1. Frim Fram Sauce
2. The Boulevard of Broken Dreams
3. Baby, Baby All the Time