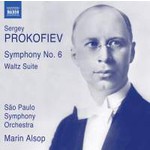 Prokofiev started work on his Sixth Symphony in 1945 and, unlike the victorious mood of the Fifth (Naxos 8573029) it reveals a darker response to war and its consequences. The work was condemned by the 'Zhdanov decree' but composer and critics regarded the symphony highly, the noble yet anguished threnody of its central Largo balanced by the painful violence of the outer movements. The work's ending has been described as "one of the most shattering in the repertoire". With themes both capricious and sensuous, the Waltz Suite recycles material from earlier scores to create a remarkably effective quasi-symphonic entity.

"Alsop and her players handle the great climactic moments with elan ... The vibrant Waltz Suite really swings, with some stylish solo playing in all sections of the orchestra." The Guardian