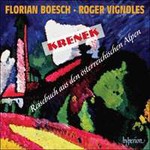 Krenek's wonderful travelogue is a real tour de force; a fusion of the remembrance of things past-the Schubertian landscape of Austria and its cultural history-with the music of the 1920s. The very special demands it makes of its performers are effortlessly negotiated by Florian Boesch and Roger Vignoles.

"It would be fair to say that Boesch has done nothing finer on disc. This is exceptional Lieder singing, fusing line, text and dynamics into an indivisible whole, all of it delivered with a conversational intimacy that is often breathtaking. The emotional ambivalences are finely projected, as sadness, dismay and anger are repeatedly undercut by self-deprecating wit and humour" Gramophone Awards 2017 Nomination - Solo Vocal

"The tone of voice, so perfectly captured by Floraian Boesch's securely focused yet nonchalant baritone, is very much that of the so-called 'new objectivity' of the 1920s…the piano accompaniments, lucidly and energtically wrought by Roger Vignoles, add little emotioinal subtext, and the tone of coice makes us feel we are eavesdropping on a private conversation with the self" BBC Music

"Florian Boesch captures with a dry humour the satirical bent of a number of the Songs, particularly so in the quiet, almost deadpan delivery of some of them…but he does blossom into a more full-blown lyricism for the first and sixth songs...Roger Vignoles's playing is marked by a more playful and lyrical impetus" Classical Source