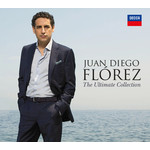 One of Decca's most acclaimed singers, Juan Diego Flórez, is the ultimate Tenor of choice. Colouring his notes like an artist does a canvas, Flórez is known for his ability to capture the hearts and ears of his audience with ardent expression and masterful technique.

Celebrating 15 years with Juan Diego Flórez, Decca Classics presents the ultimate CD compilation of his greatest recordings including tracks from the BBC Last Night of the Proms and arias from La fille du régiment and L'elisir d'amore.

On CD for the first time, 'Puisqu'on ne peut flêchir', 'Ave Maria' and 'Amapola' have been expertly re-mastered at Abbey Road studios by one of Decca's finest engineers, Ian Jones. Decca promises the highest quality of HD recordings with 24bit/48 kHz resolution.

"...when Flórez performs, audiences know they are in the presence of a true virtuoso."

Having won Peru's highest honour: Gran Cruz de la Orden del Sol del Perú, Flórez is more vocal artist than performer. His passion for spreading joy through music is translated through his philanthropic projects, including setting up a foundation in Peru encouraging the creation and development of national youth and children's choirs and orchestras.