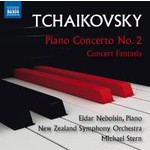 Tchaikovsky has long maintained his position as among the most popular of all composers, his unequalled gift for melody and colourful orchestration given added depth through a rich Russian soulfulness. The Second Piano Concerto has always lived under the shadow of the famous First but, played here in the composer's original version, is full of life-enhancing character and emotion. Both this and the Concert Fantasia also contain beautiful chamber-music sections allowing unique interaction between soloist and orchestra.

Eldar Nebolsin enjoys a busy international career as a soloist, recitalist and chamber music player, appearing with conductors, orchestras and colleagues of international distinction. During the 2009-2010 season he enjoyed the honour of being Artist in Residence for Musis Sacrum in Arnhem following his successful début with the Gelders Orkest and Nikolay Alexeev in 2008. In 2005 he was unanimously awarded the Sviatoslav Richter Prize in the First International Piano Competition in Moscow, where he was also honoured with the special award for the Best Classical Concerto Performance.

"…this latest recording offers the best of both worlds. Eldar Nebolsin yields nothing to Scherbakov in terms of brilliance of technique, but his piano tone is richer and more subtle in its variety of colour. …Throughout both works, interaction between soloist and orchestra is strongly characterised with some finely articulated woodwind playing. Indeed, …Nebolsin hardly puts a foot wrong, and Michael Stern secures rhythmically vibrant playing from the New Zealand Symphony Orchestra" BBC Music Magazine

"Woodwind detail is a joy in both works and the strings are full toned. Nebolsin is in tremendous form and the orchestral playing in the concerto is exemplary. The concerto is up there as a primary choice for the work on CD and the Fantasia should be considered to be a generous and laudable 29 minute bonus. This is another winner from Naxos offering quality music making and great value for money." MusicWeb April 2017

"Nebolsin opts for a reading that is refreshingly mellow, almost intimate and, above all, profoundly lyrical…[his] focus is on the shape of the phrase, inflected with the most delicate rubato. Stern and the New Zealanders mirror this rhetorical flexibility with great skill and subtlety…the finale has a fleet Mendelssohnian or perhaps Litolffian lightness…heightening the overall golden bravura of the concerto" Gramophone