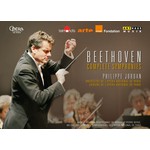 A brand new production of all the Beethoven Symphonies with the Orchestra and Chorus of the Opéra national de Paris conducted by Philippe Jordan.

Philippe Jordan presents a young but traditionalist interpretation in the spirit of historical performance practice, setting a new course in Beethoven interpretation.

Filmed in the highest quality known on the market today, this wonderful production is made by the creators of the successful Shostakovich cycle.

"All that is required is that the conductor and orchestra (plus chorus and soloists in the 9th) must perform the music accurately and as if it matters, as it most certainly does. These Paris Opera musicians under their fine Swiss music director do just that and they are well served by the video and audio production team. This music is so well known, and every classical collector is bound to have it all already, that any new recording can only aim to hold our attention and hope that we, the listeners, will respond to the artists' efforts. Emphatically this set demands a response; at the end of some performances - these really are live - I actually joined in the applause whilst alone in my music room. I single out the 4th and 8th for this, the end of the 9th is so overwhelming that applause seems somehow inappropriate." (MusicWeb Nov 2016)