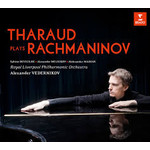 French pianist Alexandre Tharaud takes on the blockbuster 'Rach 2' concerto in a thrilling performance with the Royal Liverpool Philharmonic Orchestra and Russian maestro Alexander Vedernikov. It is coupled with more intimate Rachmaninov for piano six-hands (for which Alexandre is flanked by Alexander Melnikov and Aleksandar Madžar) and the icing on the cake: a sublime Vocalise in the original version for voice and piano, with pure-voiced French soprano Sabine Devieilhe.

Alexandre Tharaud's recorded catalogue is large and eclectic, but this is the first time he has devoted an entire album to Russian repertoire - specifically to the music of Sergei Rachmaninov. "I was still quite young when I first played this concerto," explains Tharaud. "I adored it … Rachmaninov's virtuosity really appeals to young pianists. Today, of course I'm still enthralled by the concerto's virtuosity, but now I'm more interested in its dark shadows: the sense of despair, of staring into the abyss. My interpretation of Rachmaninov has changed a lot over the years."

"After the famous introductory bars - following the score rather than the composer's recording - the sweeping first subject enters faster, thankfully, than Richter's celebrated account but with the same majestic assurance." Gramophone Award Nomination 2017 - Concerto

"this performance (of the C minor concerto) proves exemplary, with perhaps the finest exposition of the opening Russian-bells sequence in F, crescendo, since the Kapell collaboration with William Steinberg. Lovely flute and clarinet work complements Tharaud at the opening of the second movement, moving suddenly into a brief scherzo episode plus cadenza before the soothing arpeggios of the main theme recur....what has been impressive throughout has been Tharaud's total integration - quite stunningly smooth transitions - of his plastic and virtuosic playing on the Steinway D with the warm sonority of Vedernikov's Royal Liverpool Philharmonic, courtesy of sound engineer Philip Siney." AudAud Oct 2016

"The brilliant French pianist Alexandre Tharaud takes on the all-time Classic FM Hall of Fame favourite - Rachmaninov's Piano Concerto No.2 - in this thrilling performance with the Royal Liverpool Philharmonic Orchestra under Russian maestro Alexander Vedernikov. It's the first time Tharaud has devoted an entire album to Russian repertoire and Tharaud does not shirk from eschewing the work's romanticism to explore its darker shadows. The Rach 2 is coupled here with more intimate Rachmaninov for three pianists and a little sweeter icing on the cake comes in the form of a sublime Vocalise in its original version for voice and piano, with the pure-voiced French soprano Sabine Devieilhe." ClassicFM