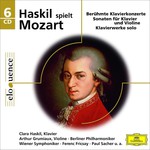 Romanian-born Clara Haskil was acknowledged as the leading Mozart player of her time. Her style embodied delicate transparency and sensitive inspiration.

Admiration and international fame came late in life for Clara Haskil, in a career beset by poor health and the adversities of a world war. Dinu Lipatti described her playing as "the sum of perfection on earth," Wilhelm Backhaus called it "the most beautiful in the world," Tatyana Nikoleyeva burst into tears when she first heard Haskil, and Rudolf Serkin nicknamed her "the perfect Clara."