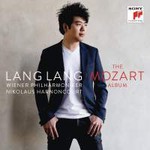 The Mozart Album will present both Piano Concertos as well as solo pieces (including the world-famous "Rondo Alla Turca") on two discs.

The two Piano Concertos (KV453 G major & KV 491 C minor) were recorded with the Vienna Philharmonic under iconic Mozart conductor Nikolaus Harnoncourt at the Vienna Musikverein. The three early Piano Sonatas have been part of Lang Lang's latest recital which he presented live in over than 200 concerts worldwide. These recordings were captured at his Royal Albert Hall concert in November 2013.

"His dexterity saw him sail nonchalantly through Mozart's bravura passages, in which there is no hiding from even the most minor mishaps; but he also showed exhilarating flair and brilliance, every gesture set clearly into the broader flow of each movement. The andantes and adagios were particularly fine. Their melodic lines were gracefully yet firmly profiled, with secondary voices allotted their due place. Above all, there was a measured yet flexible approach to tempo that gave individual ideas space to breathe, and placed them within their wider contexts with seemingly effortless deliberation." The Guardian on Royal Albert Hall (Nov 2013) concert.

"Lang Lang makes his entrance with graceful tenderness, every note eloquently weighted, each phrases measured and expressive. There's a new maturity in his playing as he leads the orchestra with sweet suggestiveness...And his cadenza are models of their kind: exquisite displays of lyricism, but staying scrupulously within the bounds of Classical good taste." BBC Music Magazine

"Of course the technique needs no comment; but the feeling is that Lang Lang has the measure of the music without approaching the impish playfulness of Brendel, the inwardness of Pires...He comes into his own, however, in the cadenzas. Here his touch is breathtakingly beautiful and, let off the leash, he is able to spin the same spells that make certain parts of his live performances so mesmerising." Gramophone Magazine

"At first sight, it's an unlikely partnership, more a PR stunt than a meeting of minds. In fact, the 84-year-old Austrian Nikolaus Harnoncourt and the young Chinese virtuoso work together well...The performance of the enchanting, harmonically ever-startling G major concerto is a joy." Sunday Times

"Lang Lang isn't simply a showman. On The Mozart Album he actually seems almost too serious as he picks his way, often careful and reticent, through two famous concertos...But the ear adjusts and spirits rise, for overall these public performances convey much more of Lang Lang's bouncy personality." The Times ***