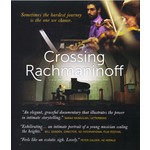 Enthralled, like its hero, by the turmoil, lyricism and sheer melodic grandeur of one of the most beloved works in the Romantic piano repertoire, Rebecca Tansley's documentary recounts the voyage of Italian-born Auckland pianist Flavio Villani. From picking out TV jingles on a rusty keyboard as a child to his debut last Christmas with a Calabrian orchestra playing Rachmaninoff's Second Piano Concerto, his path has been circuitous but purposeful.

Beginning in Auckland, where Villani arrived at the age of 26 to study performance at Auckland University, the film starts four months before the big night, but incorporates a good measure of his backstory into its countdown to show time. We see him with his own students. We see him rehearsing, performing and taking notes from his mentor, Matteo Napoli. Then it's time to return to Italy a mere ten days ahead of the performance.

You may never want to spend another Christmas in the sun once you've hung out for a winter evening in the cucina Villani, though there's something of the prodigal son about this food-filled homecoming. Villani explains his struggle with his father, an ex-military man unable to accept that his son is gay or that he could ever make a living playing the piano.

Villani's modestly avowed assurance and his easy intimacy with the filmmaker make him an entirely winning subject even when he's not channelling Rachmaninoff. The more he talks about the concerto, the easier it is to see what a vivid and exhilarating existence he's found within it. Watching and hearing him live it in the film's last act is a joyous consummation indeed. (NZIFF)