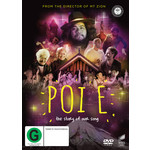 Poi E: The Story of Our Song

This is the box-office smash that took Aotearoa cinemas by storm from the moment it premiered at the New Zealand International Film Festival 2016. The story of our unofficial national anthem - the one you can dance to.

As irresistible as the song it celebrates, Tearepa Kahi's documentary explores the many tributaries that flowed into the mash-up of pop music, traditional waiata and bop that first took New Zealand by storm in 1984.

Dalvanius Prime, the man who made it happen, enjoyed an international R&B career in the 70s. He returned from Sydney to Taranaki to nurse his dying mother and stayed to embrace his culture and Te Reo Māori. Collaboration with singer Prince Tui Teka led him to Māori language composer Ngoingoi Pēwhairangi. Together they composed 'Poi E': in this film you will hear the first ever recording, made soon after.

Adding embellishments that did not please his co-composer but impressed her mokopuna, he persuaded his Taranaki whānau, the Patea Māori Club, to perform it. A man on a mission, chihuahuas under each arm, he pulled together a diverse and talented bunch of collaborators to record the song and crowdfund a brilliant music video that, amongst other things, captured the vitality and pride of his hometown facing hard times.

The film, told largely in Dalvanius' own words, is brimful of music and frank and funny testimony from numerous participants in the song's richly peopled history. Taking a lesson from the man himself, Kahi draws the next generation into the story, ably assisted by Taika Waititi, who provides Stan Walker, aged 25, with essential information about what life was like before 'Poi E'.