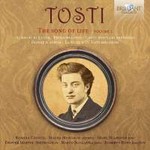 The start of a new exciting series: the complete songs by Paolo Tosti!

Paolo Tosti (1846‐1916) worked in poverty as a music teacher till he met the influential composer Giovanni Sgambati, who became his mentor. He introduced Tosti to Princess Margherita of Savoy, who became later queen of Italy. She was impressed by him and appointed him as royal music teacher. In 1875 Tosti went to London where his fame spread, and he was made Singing Master of the Royal family.

Tosti is known for his vast quantity of light, expressive songs, which are characterised by natural, singable melodies of a charming and sweet sentiment. They became immensely popular and Tosti made a fortune with them.