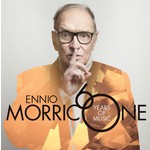 'Morricone 60' is the first album of Ennio Morricone's greatest hits to be conducted, recorded and curated by the composer himself - and aims to create a legacy for his fans to enjoy.

It sees the celebrated Maestro performing some of his greatest film music from The Good, The Bad and The Ugly to his recent Academy Award-winning score for Quentin Tarantino's The Hateful Eight.

The album marks Ennio Morricone's 60th anniversary as a composer and conductor and features brand new recordings with the Czech National Symphony Orchestra, with whom he's collaborated on major international movie scores.