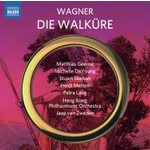 Comprising four separate operas, Der Ring des Nibelungen (The Ring of the Nibelung) is one of the supreme works in the history of music. Part II of the tetralogy, Die Walküre, centres on the young lovers Siegmund and Sieglinde, whose relationship angers Fricka, goddess of marriage, and on the disobedience of the Valkyrie Brünnhilde who is sent to carry out Fricka's wishes. Performed by an all-star international cast, the work features thrilling set-pieces such as Wotan's Farewell and the Ride of the Valkyries. The Prologue, Das Rheingold, can be heard on Naxos 8660374-75, selected as 'Album of the Week' by The Sunday Times of London, which praised its 'thrilling sense of drama'.

"As before, the playing of the Hong Kong Philharmonic Orchestra provides the foundation of the performance...Van Zweden's sense of pacing and drama never falters either, and some of the climaxes he engineers are thrillingly vivid...Skelton is magnificent throughout, surely without a rival in the role today...Overall, the performances become much more than the sum of their parts, some of which are outstanding anyway." The Guardian, 11th November 2016 ****

"van Zweden has broken free of both tradition and over-literal score-reading to interpret what is in front of him...Goerne is in almost indecently good voice...DeYoung argues Fricka's case with power and sweep...[Struckmann] uses text rather than colour to frighten as Hunding...this is an impressive and likeable achievement." Gramophone Magazine, November 2016

"A sturdy urgency is keeping Naxos's burgeoning Ring cycle powering forwards...van Zweden rouses much of the drama that would be expected in the theatre, and his Hong Kong orchestra, though hardly in the Wagnerian front rank, supports him strongly. The cycle's ace is Matthias Goerne's expressive Wotan." Financial Times, 18th November 2016