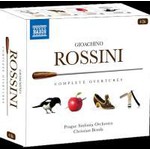 Rossini's musical wit and zest for comic characterisation have enriched the operatic repertoire immeasurably, and his overtures distil these qualities into works of colourful orchestration, bravura and charm. From his most popular, such as La scala di seta (The Silken Ladder) and La gazza ladra (The Thieving Magpie), to the rarity Matilde of Shabran, the full force of Rossini's dramatic power is revealed in these masterpieces of invention.

Each of the four discs in this set has received outstanding international acclaim, with Volume 2 described as "an unalloyed winner" by ClassicsToday, and the Prague Sinfonia Orchestra's playing described as "stunning" by American Record Guide (Volume 3).

"The playing is clean and efficient, well balanced and nicely paced," (BBC Music)

"The Prague Sinfonia Orchestra plays with tremendous character and clarity, making these works something worth listening to anew. The winds and percussion remain noteworthy, the smaller string section continues to be at once incisive and exciting, and the brass retain a somewhat watery quality that I happen to like a lot. Christian Benda has clearly put a lot of thought into these scores, and managed to maintain a level of quality that is impressive. The more famous overtures are played with a joyous relish that many a big name orchestra has lacked, while all the rarer works are given the same amount of care and attention to detail as their more illustrious disc-mates…these warmly played, lovingly conducted albums simply offer more music in better sound. This is the set of choice. Grab it now." (ClassicalNet)