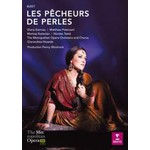 Bizet's Les Pêcheurs de perles, set in Sri Lanka, is known above all for its unforgettable duet for tenor and baritone, but it its score is full of delightful and dramatic music. When recently staged at the Metropolitan Opera in New York it proved a major success, both for the production by Penny Woolcock and the musical performance, conducted by Paolo Noseda, with (once again) Diana Damrau as the priestess Leïla and, as the two men competing for love, the tenor Matthew Polenzani (Nadir) and the baritone Mariusz Kwiecien (Zurga). Woolcock's concept brought the production up to date, with photographic and video references to the 2004 tsunami, and offered a superb 'aquatic' spectacle during the overture: the whole stage appeared to be beneath the Indian Ocean and acrobatic divers 'swam' down from the surface (located in the flies of the theatre).

"The Met has thrown everything they have at Les Pêcheurs de Perles. The current new production, shared with English National Opera, serves in New York as a vehicle for star soprano Diana Damrau. The intelligent staging comes from director Penny Woolcock. And filling out the scenario's love-triangle concept are a pair of top-tier voices belonging to legitimate actors: baritone Mariusz Kwiecien and tenor Matthew Polenzani." The Guardian

"The British director and filmmaker Penny Woolcock, working with a dream cast (featuring the soprano Diana Damrau, the tenor Matthew Polenzani and the baritone Mariusz Kwiecien), the great Met chorus and the formidable conductor Gianandrea Noseda, delivers in this sensitive and insightful production, originally created by the English National Opera in London, where it was first presented in 2010. The only previous performances of the opera at the Met were a century ago, in 1916." New York Times

In Search of Chopin