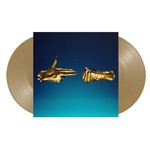 This album by Run The Jewels, the firebrand rap duo of El-P and Killer Mike, features a cadre of talented guest performers, including Danny Brown, Tunde Adebimpe of TV On The Radio, Trina, saxophonist Kamasi Washington and more, but the new album is first and foremost about the explosion of creativity born from the unique collaboration between Mike and El, a partnership-turned-friendship that has pushed both rappers to new heights in their storied careers.

In the two year span between albums, Run The Jewels have transformed from underground stalwarts to a global rap juggernaut, spawning an international art movement (Tag The Jewels), a radio show (WRTJ on Beats1), several Marvel comic cover variants (including issues of Deadpool and Luke Cage among others), characters in a video game (Gears of War 4), their own Virtual Reality initiative (VRTJ), multiple awards & accolades (including Pitchfork's 2014 al­bum of the year, NME's "Best Festival Band" & "Best International Band," four A2IM Libera Awards, two UK Music Video Awards, and more), multiple television appearances (including a hilarious Halloween-themed sketch with Stephen Colbert this October), plus a slate of sold out shows and high profile festival appearances.

Side A:
Down (feat. Joi Gilliam)
Talk To Me
Legend Has It
Call Ticketron

Side 4:
Oh Mama
Thursday in the Danger Room (feat. Kamasi Washington)
Report to the Shareholders/Kill Your Masters