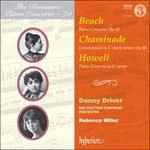 "Pick of the bunch is the Concerto by Amy Beach…Danny Driver is a highly accomplished soloist, if occasionally lacking in Romantic flexibility; the BBC Scottish Symphony Orchestra under Rebecca Miller makes a telling contribution" BBC Music Magazine, March 2017 ****

"If Driver offers a robust, muscular view of the Beach, he is certainly in touch with his feminine side in the highly attractive single-movement Concerto by Dorothy Howell...but even more appealing is Cécile Chaminade's Concertstück in the same key as the Beach...In Driver's hands it is enchanting." Gramophone Award Nomination 2017 - Concerto

"[Beach's] Piano Concerto has the heft and torrent of music that needs to be written and Danny Driver plays it with clarity and steel, absolutely unsentimental but flecked through with empathy...the sturdy weft Rebecca Miller gets from the BBC Scottish Symphony Orchestra generally suits Beach's broad-stitch writing." The Guardian, 2nd March 2017 ***

Howell, D:
Concerto for Piano and Orchestra in D minor