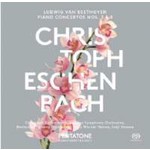 The seeds were planted in the early 1970s when Deutsche Grammophon realised what amazing results could be achieved by recording the multi-channel tapes, with either four or eight channels. Yet, due to a few restrictions, they never fully blossomed. Flaws in the playback equipment meant that music connoisseurs were prevented from enjoying these recordings in the way that artists, producers, engineers and other professionals intended, even though recording technology was already way ahead of its time.

Now - over a quarter of a century later - thanks to the arrival of the multi-channel super audio CD, there is finally a system available which permits these precious recordings to be released in the quality they already deserved back then.

As a result of Pentatone's labour of love re-recording and remastering this release, every music aficionado can hear the significance of each musical detail. This release clearly demonstrates that brilliance and virtuosity are no longer a means to show off the skills of the pianist, but now serve to convey individual expressive gestures. Another crucial innovation concerns the relationship between soloist and orchestra: the symphonic principle of the large orchestral work (i.e. with the additional expression and sound-world of the clarinets, trumpets and timpani) and the concertante principle of the solo concerto are interwoven. The soloist and the ensemble enter a yet unheard of intimacy: no longer are they simply forces set against one another; they have become partners representing the social principles of both the collective and the individual.

Beethoven' give great piano concertos give evidence not only of outstanding pianistic skills, but also of an iron will with regard to taking great strides forward in the composition. Now on SACD, you can indulge in the Beethoven Piano Concertos Nos. 3 and 5 in the intended sound quality as when they were recorded.