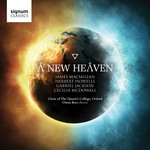 Signum's second disc with the Choir of the Queen's College Oxford is centred around the concept of 'relevation', both divine revelation (particularly the apocalyptic visions of the Book of Revelation) and revelatory visions of earth and heaven. The bulk of the pieces on the recording are inspired by the extraordinary visions of John, the writer of the Book of Revelation, describing the ravaging of the world through divine judgement, the battles between good and evil, and the world's eventual remaking as 'a new heaven and a new earth' in which death and suffering are no more. The disc features three new commissions, by Phillip Cooke, Toby Young and Marco Galvani, who was a final-year student at Queen's at the time of recording.

"The choir sound entirely at home in this repertoire, with Rees coaxing uniformly excellent accounts from them. A satisfying programme, finely sung" Choir & Organ Five Stars

"This is a fine disc. I admired the music, all of which has been selected with discernment. The choir sings extremely well throughout a challenging programme" MusicWeb

Bainton, E:
And I saw a new heaven

Cooke, P:
The World on Fire

McDowall:
I Know That My Redeemer Liveth

Rutter:
Hymn to the Creator of Light