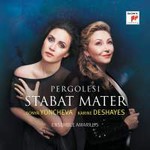 A rapidly rising star on today's opera scene, Sonya Yoncheva appears in this album alongside 'Lyric Artist of the Year' winner Karine Deshayes in a masterwork of the sacred music repertoire; Pergolesi's Stabat Mater. Yoncheva has performed on various stages worldwide, most recently in France where she astonished the audience with her performance in both Verdi's La Traviata & Tchaikovsky's Iolanta, and in Montpellier where she sang at the Radio France International Music Festival. ""Her voice is gorgeous to listen to. It is always used with penetrating intelligence and supple musicality."" (The Times) This recording also features the Ensemble Amarillis on period instruments. Founded in 1994, the Ensemble Amarillis is one of Europe's most original Baroque ensembles. "The Ensemble Amarillis responds with mercurial temperaments, from sublimely intimate to brazenly flamboyant. (BBC Music Magazine).

"Deshayes may have vibrato rather wider than standard period-instrument issue but her ornaments and sense of style are impeccable. Yoncheva, a rising star at Covent Garden and elsewhere, is even more impressive. Her honeyed soprano timbre is beautifully tuned and focused." The Times, 18th November 2016

"Mancini's Sonata in G minor, really a recorder concerto in all but name, is played with sensitive shaping and agility by Héloïse Gaillard, and Durante's Concerto grosso in F minor shows Ensemble Amarillis on compelling form" Gramophone Magazine, January 2017

"Sonya Yoncheva brings to her lines a fragile sensitivity that astonished me, given the power of her voice…the Ensemble Amarillis plays with great charm. To accompany Pergolesi it has dug up little-known chamber works by Francesco Mancini and Francesco Durante. Héloïse Gaillard, a recorder star in her own right, leads fizzy fioritura in the Mancini as boldly as she does strict counterpoint in the Durante" BBC Music Magazine, February 2017 ***