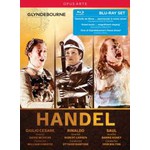 This set brings together three of Handel's most compelling works for the stage in lavish Glyndebourne productions featuring period-instrument accompaniment from the renowned Orchestra of the Age of Enlightenment. David McVicar directs an all-star cast in Giulio Cesare, combining serious insight with entertainment to bring the masterpiece to life, aided by vivid playing from the OAE under William Christie. In Robert Carsen's fun-filled transformation of Rinaldo, lacrosse sticks and flying bicycles lend the fantasy's warriors and witches contemporary chic, with conductor Ottavio Dantone leading a youthful cast from the keyboard in Handelian fashion. Director Barrie Kosky's Glyndebourne debut, Saul stole the 2015 Festival season and had critics raving. The Glyndebourne chorus plays an outstanding role, and the OAE sparkles under Ivor Bolton, as the Old Testament story is retold in Handel's time with witty anachronisms from costume designer Katrin Lea Tag.

"Dantone conducts a strongly characterised performance founded on the alert playing of the Orchestra of the Age of Enlightenment." (BBC Music on Rinaldo)

"none can top the presence and authority of Luca Pisaroni's Saracan [sic] king Argante. Directing from his tinkling harpsichord, Ottavio Dantone encourages the Orchestra of the Age of Enlightenment to be light, bright and Italian. Listen wholeheartedly; watch with caution." (The Times on Rinaldo)

'Christie conducts Handel beguilingly - in fact, I'd go so far as to suggest that nobody does Handel better. Christie drew brisk playing from the Orchestra of the Age of Enlightenment, crisp and punchy, yet he also carried the slow tempos with magical stillness. But the performance was about much more than sound alone: underneath the OAE's sheen there was an internalized musical depth to each of the numbers.'
(Opera on Giulio Cesare)