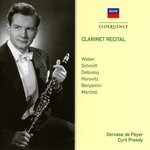 'Gervase de Peyer is one of the greatest instrumentalist' announced Fanfare magazine. Sadly one of the foremost clarinettists of the 20th century passed away on February 4th, 2017.

London-born Gervase de Peyer was chosen soloist for a host of conductors and made many award-winning recordings for Decca, L'Oiseau-Lyre and EMI among others. His Concerto recordings have won the Grand Prix du Disque, Charles Gros and the Plaque of Honour of the Academy of Arts and Sciences of America. His solo performances in recitals and in Chamber Music have been awarded many honours and remain highly recommended. In 1950 he was a founding member of the Melos Ensemble of London.

This recital of works for clarinet and piano of mostly 20th-century repertoire, but including Weber's virtuosic Grand Duo Concertant from 1816, was highly regarded when first issued, and receives its first release on CD.

"The brilliance and attack of both players to the Weber is such that you woud hardly think two such athletic performers could quickly assume a poetic disguise. But, stressing the hundred-year gulf, they do so, and it serves to illuminate some music of very great charm … The recording offers an excellent balance between the two instruments; a slight shift away from the traditional stress on the clarinet in this particular combination is all to the good as far as the blend, a difficult one, is concerned." - Gramophone

"His phrasing is like that of a human singer, but with a power, agility and range beyond any singer's capability; technique that treats the music as though it were happening spontaneously for the first time; an acute awareness of overall form and a tone like a voice coming down from Heaven - voices, actually, because the clarinet has more than one." Washington Post