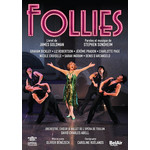 Composer and lyricist ("West Side Story"), author of film music, Stephen Sondheim transcends the genre of the musical and the magnificent. He was certainly the most exciting composer of Broadway in the last fifty years.

A true cult following is dedicated to "Follies", considered the most accomplished spectacle of Sondheim and one of the jewels of the history of the American musical. "Follies" on a libretto by James Goldman, makes us share the memories of a troupe of music-hall perfomers during their final evening evening. Couples make and break, hopes illusory and missed appointments. The characters try desperately to regain their youth but the time has passed ...

Founded in 1971, "Follies" has since given birth to countless productions in the United States, England and even Germany. The "musical" was nominated in 11 categories at the Tony Awards the year of its creation and won 7.

"The orchestra, which sounds brilliant, is directed by David Charles Abell, who knows how to live every measure as if it had just been written. (...) Bravo for Graham Bickley, Liz Robertson, Charlotte Page, Marilyn Hill Smith, Julia Sutton, Sarah Ingram ... and the great French people who took part in the adventure, Nicole Croisille, Jérôme Pradon, Denis D'Arcangelo, who have no need to envy their Anglo-Saxon colleagues." DIAPASON

"The choice of the soloists is of irreproachable quality. The Follies' production in Toulouse is shining with a thousand fires ... Very respectful of the work, Olivier Bénézech leads the staging drum beating. The conductor, David Charles Abell, a fine connoisseur of the music of Sondheim (he directed Sweeney Todd at the Châtelet in 2011), highlights all the subtleties of its composition." MUSICALAVENUE.FR