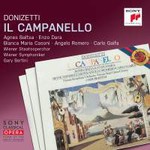 A rarely performed Donizetti opera recorded in 1983. A first recording of his Il campanello di notte: "This sparkling one-act piece", declared the Penguin Guide, "is based on something like the same story which Donizetti developed later in Don Pasquale. Enzo Dara and Angelo Romero are delightful in their patter duet, and Agnes Baltsa is a formidable but sparkling Serafini. Gary Bertini is a sympathetic conductor who paces things well."

"One of Donizetti's most charming short operas, with a Don Pasquale-like plot, and gorgeously performed by Agnes Baltsa and Enzo Dara, this is a nice way of spending 55 minutes." BBC Music