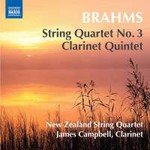 Brahms wrote his String Quartet in B flat major, Op. 67 in 1876 and its largely unclouded and cheerful qualities culminate in a theme and variations finale of exceptional imagination and mastery of form. His last chamber music was inspired by a great exponent of the clarinet, Richard Mühlfeld, for whom he wrote four works including the Clarinet Quintet. This dazzling masterpiece is notable not only for its underlying elegiac mood but for its thematic interrelation and the wide expressive range of the solo instrument. The first two String Quartets can be heard on 8573433 in performances described by ClassicsToday as "… passionate expressions of these scores."

The New Zealand String Quartet celebrated its 29th season in 2016, and its distinguished international reputation has been enhanced through acclaim for their recordings for Naxos. These include three volumes of Felix Mendelssohn's quartets, the first volume (8570001) of which was made a Gramophone Recommends title. This multi-faceted quartet is equally at home with the intensity of Alban Berg's quartets (8557374) given a 10/10 score by ClassicsToday.com who marveled "at the individual players' virtuosity, but you also have to appreciate that the relatively warm yet pleasingly "edgy" quality to the sound and the oneness of spirit in the interpretations come from the highest-order functioning of the well-integrated collective parts of a mature, vital body - that is, a string quartet that's been together a long time, each member sharing life and breath in the music they make together."