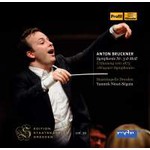 "Nézet-Séguin has got this huge, seemingly sprawling score better than anyone else I've heard…somehow lush Wagnerian ardour and a much older kind of mystical austerity don't just cohabit, they even fuse…[the Dresden Staatskapelle] bring a feeling for the special sound world of this version that beats all rivals" BBC Music Five Stars Orchestral Choice March 2017

"Revelatory and awe-inspiring - it's a certainty to be one of my Records of the Year for 2016." MusicWeb