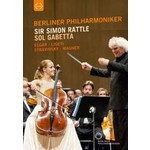 The Argentinian cellist Sol Gabetta made her Philharmoniker debut at the 2014 Easter Festival in Baden-Baden with Edward Elgar's Cello Concerto, the final great work of the composer. "Sol Gabetta's Elgar Concerto is one of the best around, a heartfelt, tonally rounded performance." (Gramophone). The orchestra and conductor also performed the prelude to Wagner's Lohengrin, György Ligeti's orchestral piece Atmosphères and Igor Stravinsky's Le Sacre du Printemps, a work which is entirely focused on the future and pushes the boundaries of classical music in terms of sound, rhythm and energy.

Sir Simon Rattle and the Berliner Philharmoniker contrasted the prelude to Wagner's Lohengrin and György Ligeti's orchestral piece Atmosphères perfectly, demonstrating that they both employ different styles to pursue a similar objective - an iridescent, otherworldly sound.

Star cellist Sol Gabetta gave an outstanding interpretation of Elgar's Cello Concerto: the final great work of the composer, full of melancholy and a sense of farewell.

In contrast to Elgar, Igor Stravinsky's Le Sacre du Printemps is focused on the future. In their previous performances, the Berliner Philharmoniker and Simon Rattle have shown that this work, despite its inherent modernity, also provides a wealth of sensual pleasure. "The musicians breezed through the Sacre with ridiculous virtuosity, as laid-back as if it were a mambo on a dance floor on a Caribbean beach." (Frankfurter Allgemeine Zeitung)

"Rattle's presence can be heard, and felt, in virtually every bar of the score: the way he moulds phrases, nudges details to the fore, bends the line, holds tight to a salient accompanying detail (especially along the lower end of the spectrum) or responds to Gabetta's characterful solo playing, now rather more stylised than it was before." (Gramophone DVD/Blu-ray of the Month - February 2017)

"The filming and editing is always appropriate to what we are hearing, and the sound recording copes with the violent impact of some pages of the Rite, just as it does with the thresholds of silence in some of Atmosphères. Overall then this is rather more than a souvenir of a very good concert, for it enshrines four performances each of which is worth not only hearing, but rehearing." MusicWeb Feb 2017

Stravinsky:
The Rite of Spring