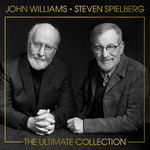 Over the 90-year history of sound film, there have been a handful of instances where a director and a composer have formed a longtime partnership that resulted in a series of classical scores, creating music that stands the test of time. None, however, have been as long or as fruitful as the 43-year collaboration of Steven Spielberg and John Williams. None have encompassed such a wide range of subject matter or, more significantly, have had such an enormous impact on worldwide popular culture. From the ominous shark signature of Jaws to the five-note alien greeting of Close Encounters of the Third Kind; from the heroic march of Raiders of the Lost Ark to the moving themes for Schindler's List - the music Williams has written for more than two dozen Spielberg projects has not only served them brilliantly but entered the wider public consciousness.

Twenty-five years ago, Sony Classical began charting the Spielberg-Williams collaboration, recording two discs of their greatest hits. For this new release, John Williams & Steven Spielberg: The Ultimate Collection, these two CDs, The Spielberg/Williams Collaboration and Williams on Williams: The Classic Spielberg Scores, are included along with newly arranged and recorded material from the past two decades of their additional movie scores, The Spielberg/Williams Collaboration Part III, and a newly filmed bonus DVD documentary film, Steven Spielberg & John Williams: The Adventure Continues.

With a record fifty Academy Award nominations (more than any other composer) Williams has demonstrated, again and again, his ability to connect with audiences, both in the movie theater and in the concert hall. Seventeen of those nominations, and three of Williams' five Oscar wins (Jaws, E.T. and Schindler's List) have been for Spielberg films. The sheer variety of music, the depth of compositional skill on display, the powerful emotions that it evokes, makes John Williams & Steven Spielberg: The Ultimate Collection an extraordinary accomplishment. This is the work of one of America's greatest composers, inspired by the work of one of America's greatest filmmakers.

- Disc 1 -
1 Raiders March from "Raiders of the Lost Ark"
2 Theme from "Always"
3 Adventures on Earth from "E.T. the Extra-Terrestrial"
4 Theme from "Sugarland Express"
5 Title Theme from "Jaws"
6 Out to Sea / the Shark Cage Fugue from "Jaws" - John Williams / the Boston Pops Orchestra
7 Exsultate Justi from "Empire of the Sun"
8 Parade of the Slave Children from "Indiana Jones and the Temple of Doom"
9 Over the Moon from "E.T. the Extra Terrestrial"
10 March from "1941"
11 Cadillac of the Skies from "Empire of the Sun"
12 Scherzo for Motorcycle and Orchestra from "Indiana Jones and the Last Crusade"
13 Close Encounters of the Third Kind/When You Wish Upon a Star Medley - John Williams / the Boston Pops Orchestra

- Disc 2 -
1 Flying from "E.T. the Extra-Terrestrial"
2 Theme from "Jurassic Park"
3 Remembrances from "Schindler's List"
4 Flight to Neverland from "Hook"
5 The Battle of Hollywood from "1941" (Includes the Irish Folksong "The Rakes of Mallow")
6 Smee's Plan from "Hook"
7 The Barrel Chase from "Jaws"
8 My Friend, the Brachiosaurus from "Jurassic Park"
9 Jim's New Life from "Empire of the Sun"
10 The Dialogue from "Close Encounters of the Third Kind"
11 The Lost Boys Ballet from "Hook"
12 Theme from "Schindler's List"
13 The Basket Chase from "Raiders of the Lost Ark"
14 The Face of Pan from "Hook"
15 The Banquet Scene from "Hook"