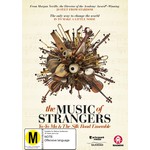 This is the extraordinary new film from Morgan Neville, the director of the Oscar-winning documentary 20 Feet from Stardom. Spanning the globe, this is the celebratory story of the renowned international musical collective created by legendary cellist Yo-Yo Ma. The feature-length documentary follows this group of diverse instrumentalists, vocalists, composers, arrangers, visual artists and storytellers as they explore the power of music to preserve tradition, shape cultural evolution and inspire hope.

"As he demonstrated with 2013's 20 Feet from Stardom, American documentary filmmaker Morgan Neville excels at deftly sketching the stories of musicians whose life and art don't always intersect. He does that again with members of the Silk Road Ensemble, a sprawling collective of gifted musicians who span the classical and traditional strands that has been assembled by celebrated Chinese-American cellist Yo-Yo Ma. The Iranian Kayhan Kalhor, a master of a small traditional bowed instrument called the kamancheh, has repeatedly come and gone from his homeland during periods of turmoil, and with impeccable sounds but woolly sentiments this film tries to make the case for music as a harbinger of cross-cultural understanding and world peace. At the centre of it Ma is a studied, unrevealed figure, while the rehearsals and jam sessions create a joyous glow of affirmation that overwhelms a deeper sense of inquiry; the longer the film goes on, the less it has to say." Melbourne Age