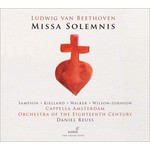 The Orchestra of the Eighteenth Century continues its vibrant music-making journey, very much in the spirit of its late founder Frans Brüggen, with specially invited conductors. In order to tackle Beethoven's mighty 'Missa Solemnis', the orchestra formed a partnership with highly-regarded Daniel Reuss, who has recorded a sizeable number of critically-acclaimed choral masterpieces, many of them with Cappella Amsterdam. This fine Dutch chorus is possessed of all the right skills to climb this glorious mountain of a work; notably vocal agility and stamina. The chorus is joined by an outstanding quartet of soloists in Carolyn Sampson, Marianne Beate Kielland, Thomas Walker and David Wilson-Johnson. The Orchestra of the Eighteenth Century has significant experience performing the music of Beethoven on period instruments (and its current concert schedule embraces the symphonies, piano concertos and Fidelio), all the more necessary with such a demanding work.

This new recording comes with an elegant essay from Bas van Putten, but also by a fascinating series of images captured by photographer and violinist Annelies van der Vegt, taken across The Netherlands during the course of the orchestra's concert tour with the Missa Solemnis.

"Period-style recordings of this work are surprisingly rare, dominated by Harnoncourt, Gardiner and Herreweghe, but this belongs with the best. The choir is superb and the solo quartet - led by Carolyn Sampson - are fearless." Sunday Times, 9th April 2017

"this is a Missa Solemnis that, for me, really taps into the spirituality of Beethoven's vision. There is depth and insight in every movement, and the overall result is as moving as it is musically impressive." MusicWeb International, 18th April 2017