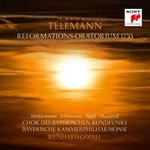 A new album featuring a world premiere recording of a late work by Telemann (1681-1767). A Reformation oratorio composed to celebrate the 200th anniversary of the Peace of Augsburg in 1555 discovered by Reinhard Goebel, conductor and founder of Concerto Köln. An excellent recording with the Chor des Bayerischen Rundfunks. Leading soloists, including Sony Classical exclusive artists Regula Mühlemann (soprano) and Benjamin Appl (baritone) Conductor Reinhard Goebel went off in search of forgotten treasures to mark the anniversary year of Georg Philipp Telemann's death and unearthed something special. He discovered a sumptuous late work by Telemann also appropriate for celebrating the quincentennial of the Lutheran Reformation: an oratorio composed in 1755 to commemorate the 200th anniversary of the Peace of Augsburg in 1555. The recording features the outstanding Chor des Bayrischen Rundfunks, the Bayerische Kammerphilharmonie and excellent soloists: the young soprano Regula Mühlemann, who has earned international acclaim with her Sony Classical debut CD of Mozart arias, the young Viennese tenor Daniel Johannsen, the baritone and Gramophone Young Artist of the Year award winner Benjamin Appl and the excellent bass Stephan MacLeod add pedigree to this unique contribution marking this Telemann anniversary year.

"Barely an hour long, the oratorio's concision is accounted for by the sermon that would have divided parts 1 and 2. Cut free from this liturgical weight, the work is a contemplative affair...the whole lilts along nicely enough under Goebel's direction."
(Gramophone)

"I enjoyed the singing a lot (especially the soloists), and I loved the music and wondered at the still fertile and creative mind of its septuagenarian composer." Early Music Review