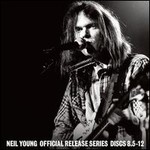 Official Releases Series is the name Neil Young has given to the personally approved remasters of his core catalog. The series debuted in 2012 with a four-album box that contained Young's first four albums, and this 2016 installment covers his next five: the Stephen Stills duet album Long May You Run (its presence is why this is billed as "8.5"), American Stars & Bars, Comes a Time, Rust Never Sleeps, and Live Rust. Whether they're heard in new vinyl pressings or CDs released in 2017, the remasters are vivid and robust -- the best this music has ever sounded, and that's reason enough for hardcore Neil Young fans to purchase these titles again. ~ Stephen Thomas Erlewine, Rovi

Long May You Run
Make Love to You
Midnight on the Bay
Black Coral
Ocean Girl
Let It Shine
12/8 Blues
Fontainebleau
Guardian Angel
The Old Country Waltz
Saddle Up the Palomino
Hey Babe
Hold Back the Tears
Bite the Bullet
Star of Bethlehem
Will to Love
Like a Hurricane
Homegrown
Goin? Back
Comes a Time
Look Out for My Love
Lotta Love
Peace of Mind
Human Highway
Already One
Field of Opportunity
Motorcycle Mama
Four Strong Winds
My My, Hey Hey (Out of the Blue)
Thrasher
Ride My Llama
Pocahontas
Sail Away
Powderfinger
Welfare Mothers
Sedan Delivery
Hey Hey, My My (Into the Black)
Sugar Mountain
I Am a Child
Comes a Time
After the Gold Rush
My My, Hey Hey (Out of the Blue)
When You Dance I Can Really Love
The Loner
The Needle and the Damage Done
Lotta Love
Sedan Delivery
Powderfinger
Cortez the Killer
Cinnamon Girl
Like a Huricane
Hey Hey, My My (Into the Balck)
Tonight's the Night