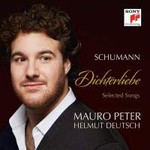 Born in Lucerne, the young tenor Mauro Peter studied in Munich/Germany. He was winner of the first prize and the audience award at the 2012 International Robert Schumann Competition in Zwickau. He had a sensational debut in 2012 with Schubert's Die schöne Müllerin, accompanied by Helmut Deutsch, at the Schubertiade in Schwarzenberg. From that moment on he has been a regular guest at international concert halls and opera houses. Helmut Deutsch is one of the most sought-after pianists for chamber music and vocal accompaniment. He studied piano, composition, and musicology at the Vienna Music Academy, where he was awarded the Vienna Composition Prize. Here they join together to record 'A Poet's Love' & selected music of Robert Schumann (1810-1856).

"This is a winning account of the famous cycle Dichterliebe, perhaps the best since Jonas Kaufmann at the 2000 Edinburgh festival. Peter's diction is immaculate and there's a sense of both rapture and disillusion as his Maytime love gradually turns sour." Sunday Times

"Mauro Peter has the kind of Dichterliebe voice I hear in my mind's ear: fresh, youthful, evenly produced, with mellifluousness balanced by a touch of metal...In symbiotic accord with Helmut Deutsch, Peter phrases with unforced eloquence, pointing salient words within a liquid legato." Gramophone Award Nomination 2017 - Solo Vocal