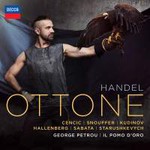 Handel's Ottone, re di Germania is presented here in a new recording by Max Emanuel Cencic and a superb cast, under the baton of George Petrou with Il Pomo d'Oro.

Premiered in London in 1723, Ottone was one of Handel's most successful operas during his lifetime. This rare recording breathes new life into one of the master's greatest works.

"Cenčić lends his ripe countertenor to the title role of a relatively neglected Handel opera and leads a performance to relish...Hallenberg all but upstages everyone around her...George Petrou's orchestra offers eloquent and elegant support throughout." The Guardian, 26th May 2017 ****

"Petrou draws rhythmically animated, sensitively coloured playing from the crack Italian band...The cast is uniformly strong...Cenčić, with his unusually powerful, sensuous countertenor, rescues [Ottone] from self-regarding wimpishess. ..this new recording is emphatically the version to have of an opera whose dramatic flaws are redeemed by magnificent individual scenes and any number of good tunes." Gramophone Magazine Editor's Choice, September 2017