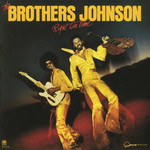 Louis and George Johnson formed The Brothers Johnson under the auspices of Quincy Jones in 1975, releasing this second album in 1977. With Quincy at the helm as producer, the duo quickly broke wide open with its debut album.

The Brothers Johnson's second album Right on Time consists of some of the best proto-typical funk-soul grooves from the late 70s. The album is again produced by Quincy Jones and his contributions ensure the high quality of the instrumental arrangements and general glossiness of the audio production as in their debut album.

Several of the tracks are as good as anything Michael Jackson or Earth Wind and Fire would've produced around this time, particularly "Runnin' For Your Lovin'", "Strawberry Letter 23" and "Never Leave You Lonely". There are also two fantastic instrumentals, "Q" and "Brother Man" that are both irrepressibly funky, with Louis Johnson's tight bass providing the solid rhythmic foundation he is famous for. Fusion fans will be familiar with several of the backing musicians: Harvey Mason, Dave Grusin and Lee Ritenour to name a few.