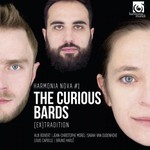 An album at the intersection of the art music and traditional repertories of Ireland and Scotland, performed by five instrumentalists trained in the Early Music departments of the prestigious conservatories of Lyon, Basel and Paris. Here are modern-day bards, passionately following a path based on primary research and giving pride of place to innovation and creation.

The harmonia#nova series is conceived to offer young artists singled out for their exceptional talents a technical, editorial and promotional showcase that lives up to the high standards of harmonia mundi's classical productions. While those standards remain identical across a very wide range of repertories, the recording philosophy governing this series is rather different, since it is produced above all by the musicians themselves.

Anonymous
1. A Set of 3 Scottish Airs:
The Lads of Elgin (reel)
The Highlandman kissed his mother (reel)
The Fyket (reel)

13. A Set of 3 Scottish Airs
Miss Loraine of Kirkharles (reel)
Fight about the Fire side (reel)
Lochailis away to France (reel)