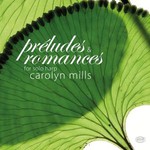 "Some years ago, Carolyn Mills jested on her website that harps weren't just for angels anymore, warning us not to be seduced by the instrument's peaceful, rippling and ethereal waterfall sound.

There are plenty of waterfalls on Mills' new CD, Preludes & Romances, recorded alongside her duties as Principal Harpist for the New Zealand Symphony Orchestra, but they're not the only feature of this album's soundscapes.

American-born Mills has always been a fervent supporter of the local, here playing a superb instrument made by Northland harpmaker Kim Webby. She is also a dedicated performer and commissioner of NZ music.

Helen Fisher's Otari, which provides the final quarter-hour of this disc, is a beautifully sustained piece of writing by a composer best known for her choral piece Pounamu and an extraordinary flute solo, Te Tangi A Te Matui.

Sometimes the cascading glissandi in Otari suggest a howling hurricane might be bearing down on the native bush reserve that inspired the piece; yet delicate evocations of birds, insects and breezes, caught in a happy coming together of harp strings and "household items", are spellbinding.

Most of the music on Preludes & Romance is French and at its best, in Marcel Grandjany's opening Automne, there is a refinement and lightness of touch that reminds one that esquisse, the French word for sketch, is closely related to the adjective exquisite.

However, Mills' own transcription of a Debussy curiosity, written in 1915 for a benefit concert to clothe battle-worn soldiers, doesn't quite catch its throwaway waltz, without the resonant bass notes of the piano original.

While two compositions by Americans Nicolas Flagello and Kevin Kaska are disappointingly slight, it's to Mills' considerable credit that, by including eight preludes by Bernard Andres, she makes one eager to hear the remaining pieces from the Frenchman's three collections of these works.

Finally, it is not only NZ composers to whom she has given a voice. The booklet's cover, an image of a translucent raurenga leaf, rendered by Auckland artist Maureen Lander, both catches the eye and complements the sonic finesse of Wayne Laird's sympathetic production."