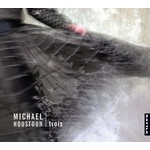 Michael Houstoun's second release on Rattle in 2017, following the exceptional tour de force of Beethoven's Diabelli Variations, is a selection of personal favourites from the repertoire of French piano music. Trois is an album of absolutely beautiful music, and features the work of Maurice Ravel, Erik Satie, Claude Debussy, Gabriel Fauré, and Francis Poulenc.

" What a pleasure it is to hear Michael Houstoun relaxing in this collection of French music, just months after the triumph of his Diabelli Variations.

The title of the new disc, Trois, is explained by producer Kenneth Young, taking on liner note duties; the three movements of Ravel's opening Sonatine inspired the pianist to create similar sets of pieces from works by four other French composers.

Erik Satie (1866-1925) scores six tracks. His well-known three Gymnopedies, played with unexpected but effective deliberation, are each paired with one of his gnarlier Gnossiennes. Spread throughout the album, they're like sweet and bitter sorbets between courses in a classy degustation.

Songs from the Arc of Life
more suggestions…