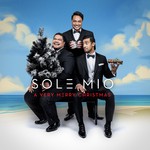 Sol3 Mio's first ever Christmas album! A Very Merry Christmas features the breathtaking voices of Pene Pati, Amitai Pati and Moses Mackay, this much requested album will delight their legions of fans and is destined to become a bona fide Kiwi classic, for this Christmas and for many holiday seasons to come.

Inspired by their much loved 2013 recording of Have Yourself A Merry Little Christmas and by the audiences they have enchanted at their revered Christmas in the Vines concerts of the past three years, this new collection sees the group putting their own unique spin on the traditional Christmas album.

With its distinctive Kiwi feel and classic Sol3 Mio sound, A Very Merry Christmas evades the traditional themes of winter wonderlands and log fires to instead encapsulate the truly unique spirit of Christmas in the Southern Hemisphere.

Like Christmas itself, this is an album full of surprises. It marks a song writing first for Sol3 Mio with Moses Mackay penning two stunning original Christmas songs for the album. Look out too for some soon-to-be-announced special guests who make an appearance on the record.

"We're thrilled to finally be able to announce the release of our very own Christmas album! I can't wait for fans to hear our Kiwi take on so many wonderful holiday classics, as well as the two original songs written especially for the record" says Mackay.

Screenplaying - The Best of Mark Knopfler