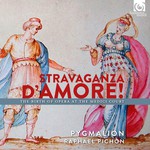 Late sixteenth-century Florence was a theatre: first and foremost a political one, in the eyes of the dynasties that wished to use the arts to display their power. A humanist one too, as is shown by these intermedi (interludes) that sought to achieve the perfect blend between music and poetry, the ideal of a certain Renaissance. Inserted into plays imitating the ancient writers, these entertainments were presented with lavish visual and musical resources. After reaching an initial peak in 1589 with the intermedi composed for Bargagli's La pellegrina, this tradition was prolonged in the burgeoning genre of opera by such composers as Peri, Caccini (Euridice, 1600) and, very soon, Monteverdi (L'Orfeo) and Gagliano (Dafne).

Rather than aiming for the impossible ideal of a reconstruction, Raphaël Pichon has devised a sort of imaginary intermedio by selecting the finest gems from this repertory, featuring the figures of Apollo, Orpheus and Eurydice, and above all Cupid: Love, Love, Love!

"Harmonia Mundi's production has all the sumptuousness of the original Medici spectacle...The performances are highly polished, chorus and ensemble, producing a glossy and liberally embellished sound while the dozen soloists give fine and well-balanced contributions. Pichon's approach is certainly creative and, though ultimately it's something of a hodge-podge of genres and periods, it's all very stylishly done." BBC Music Opera Choice October 2017

"Raphael Pichon has created an original and entertaining compiliation of musical fragments … joyous stuff … there's a suitably festive air to proceedings … it is fun, and the luxurious presentation book is hugely informative" Opera Now

"Pichon has ingeniously encouraged structured listening across composers and genres of a kind that rarely occurs on record; the results are fascinating and, at times, revelatory...there is some spectacular improvised instrumental ornamentation (just occasionally a little exaggerated), while the whole is expertly underpinned by a rich array of continuo instruments." Gramophone Editor's Choice Awards Issue 2017

"As usual with Rameau, the dance music is a delight, and it's beautifully played. Another pleasure is the high-quality casting of Philippe Talbot and Sabine Devieilhe in minor roles...[Ainsworth's] voice is still in excellent shape, the top notes light and unforced, while his declaiming of the text sounds free and natural...All in all this is a splendid achievement." Gramophone Magazine, July 2015