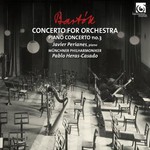 The inexhaustible strength of a genius Neither the disillusionment that set in after his exile to the United States nor his declining health stopped Bartók from fulfilling his commission for the Concerto for Orchestra nor from writing the Third Piano Concerto, his final work, intended to secure his wife's future. Hence his gloomy circumstances led to two masterpieces (and gained him a long-awaited American reputation). They are magnificently served here by Javier Perianes and the musicians of the Münchner Philharmoniker under the direction of Pablo Heras-Casado.

"[The Concerto] is Bartók In repose contemplating his homeland from afar, half-remembered melodies given a singing expressiveness to which Javier Perianes brings great warmth…The two Spaniards dispatch the finale's lust for life with the requisite panache" Gramophone

"[Heras-Casado's] account of the frequently recorded Concerto for Orchestra bristles with the vitality of a fresh encounter. He gets vivid playing from the Munich wind players in the Game of Couples movement, and intense, saturated string sound in the Elegy...Perianes relishes the "Mozartian" grace of [the Piano Concerto's] solo piano part" Sunday Times

"As pianist Javier Perianes makes clear in this beautifully considered performance...there is no hiding the fingerprints of Hungary's most unique and revolutionary 20th century composer. There is a subdued magic, a sort of clinical restraint, that, paradoxically, injects it with a taut sense of excitement. That same crystalline intensity pervades Heras-Casedo's fine-tuned reading of the Concerto for Orchestra." The Scotsman