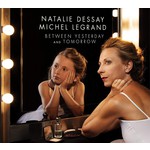 Sony Classical presents Between Yesterday and Tomorrow, a truly unique album from the stunning Natalie Dessay alongside Michel Legrand and the London Studio Orchestra. Composed by multi-award-winning artist Michel Legrand and written by American poets Alan and Marilyn Bergman, this album is made up of a cycle of songs. It tells the story of a woman's life from birth to death, passing by all of its highlights: childhood, adolescence, first love, and motherhood. Composed and written in the 70s, the project was never completed, and it is thanks to Natalie that this album receives its second life. Natalie Dessay is known for constantly striving to diversify and renew her repertoire, and in Between Yesterday and Tomorrow she presents a genuine modern oratorio. Between Yesterday and Tomorrow is the second collaboration between Dessay and Legrand.