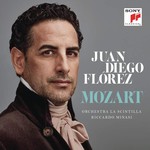 Acclaimed across the globe for the beauty of his voice, the emotional power of his performances, and his extraordinarily dazzling high notes, the Peruvian superstar tenor Juan Diego Flórez has so far in his career focused almost exclusively on the masterpieces of the bel canto repertoire by Rossini, Donizetti and Bellini, and others. Now, in his eagerly awaited debut recording for Sony Classical, he turns his attention to a composer with whose works his talents also have an ideal relationship. "I've always wanted to do it, but now is the time. I finally feel I'm ready to convey the expressiveness, the simplicity, the universality - in short, the magic - of Mozart. Mozart's music is universal, transcendental. Everybody loves his music. You don't have to understand why you love it, but you just do. That's his magic."